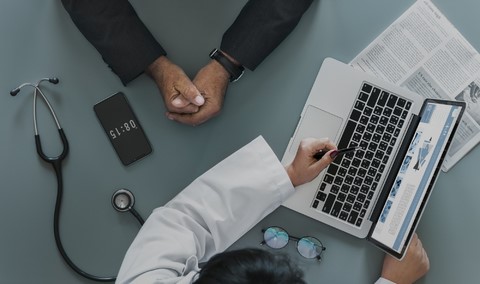 Life in developing countries is quite challenging for doctors as they have to deal with a large number of patients with limited resources. The developer created Bot M.D., a chatbot which provides sound medical answers to doctors.

The chatbot comes with a myriad of features such as converting voice notes to text for transcriptions, language translation and answer different types of questions on diseases and drugs. You can invite other doctors to use this chatbot so that you can use it as a private messaging platform. Today, we will use this chatbot to test out its functionality:

When the developer created this chatbot, it used Facebook Messenger as the platform. However, the developer decided to create a separate app, available only on Google Play Store. After downloading the app and giving it the necessary permissions, we got to the main screen.

In the chat, the bot gives you a brief introduction about itself, before asking you to play a small game, so that you can learn about its features. We found this quite interesting, as you will remember how to use its features.

At first, the chatbot will tell you that you can search for medical videos by typing “Show video of ‘x’ ” in the chat. We decided to try out this feature to see if it works as expected. We typed “Show video of vasectomy,” and the chatbot’s answer surprised us. The chatbot showed us five videos which talk about vasectomy. If you tap on any of the videos, it will redirect you to YouTube, where you can watch the video.

Moving to the next feature, you can use the chatbot to search for different types of medical images. Again, to test out this feature, we entered “Show image of tennis elbow,” and the chatbot was on point with its answers. It gave us plenty of images on tennis elbow, which we believe would be useful to doctors.

The third feature is quite interesting, as it allows you to understand how two drugs interact with one another. Upon typing “warfarin x cimetidine” in the chat, the bot displayed a small table which describes the effects of these two drugs. The chatbot differentiated their effects into two categories, “serious” and “significant.”

We were quite surprised, as the chatbot gave us a lot more options to understand this disorder. For instance, you can learn how it affects children and infants, diseases which cause this disorder, and types of treatment.

The chatbot gives you the option of converting units of measurement into different values, which is another great feature. We imagine this would be useful to doctors as they can convert values into imperial or metric units. You can find out the normal reference values for various types of biomolecules. Also, this chatbot can find out about the potential side effects of various drugs.

Bot M.D. also lets you learn about the various commands, in case you haven’t used the app in a long time. There is a small icon on the bottom right corner which shows you the list of commands. You have the option of running through the tutorial so that you are familiar with the features.

When entering notes, you can use the audio format, and the chatbot converts it into text. After using a sample voice note, the chatbot was able to translate the recording without any errors.

Out of all the chatbots which provide medical assistance, we consider Bot M.D. to be among one of the best at the moment. Its features are extremely useful, especially to doctors, as it provides essential information within a couple of seconds. After spending time with this chatbot, it is easy to understand why it will be popular among doctors. For instance, doctors no longer need to write notes about patients, as the chatbot can convert voice recordings into text.

Brought to you by SingaporeChabots.